It has gotten to the point where smartphones are more than just tools to us. They are actually a part of us in a way because we use them to send important messages about ourselves to others. No one can imagine being without their smartphones now. Our society has never been so mobilized before. According to comScore’s US Mobile App Reports, 50% of the time people spend using digital media is done through smartphone apps. More time is often spent on mobile apps than mobile websites. Even though the average person only uses under 20 apps per month, these apps are displayed on their home screens which makes them easy to access. The mobile platform and smartphone that a person chooses for themselves can tell you a lot about their personality, behavior and even their habits. As you continue reading, you will have a better understanding of Android users and iOS users. Based on this newfound knowledge you can learn to measure the success of your app in a whole new way. The Basics More than 97% of all the market share for mobile operating systems can be attributed to Apple iOS and Android mobile devices. Since August 2017, 64% of the market share is from Android alone. Why is this? Well, Android devices are much cheaper than iOS devices. This allows people in developing countries and low-income locations to participate in the global market share of Android. For instance, people in Africa and Asia use Android more than iOS. As for Apple iOS, their profit share is still significantly more than Google’s Android. This is likely due to two reasons; Apple devices cost more money and the people who use them are more actively engaged. Mobile App Design iOS and Android apps have a lot of big differences which impact the experience of their users. Take Apple, for example. They have much tougher guidelines for app submissions and the requirements they need to meet. Plus, each time you update the app, a human must review the update. This is not what happens with Android apps. The updates you make to your Android app listings are automatically reviewed by the system. This speeds the review time without having to depend on a human. Best of all, there are several phone makers which have the Android operating system on them, such as Motorola, HTC, Samsung, and LG. This allows users to customize their own experience. As you can see, there are pros and cons with both operating systems. The choice you make really depends on your own preferences. Apple iOS end users love the frequent updates and consistent experience that their devices offer. Android users love their devices because there is more freedom to customize the experience and make it unique. 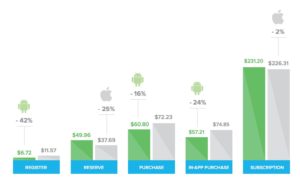 Primary Demographic Differences Like previously mentioned, Android is popular in developing nations and low-income locations because its devices are cheaper. Since Apple devices cost more money, its users generally make more money than Android users. Not only that, Apple users generally have a better education and like to engage more. This doesn’t mean that all educated people with high incomes don’t use Android devices because some do. However, the greatest percentage of Android users are lower income. More iOS users are men rather than women. You’ll also find more people 65 and older using iOS than people younger than that. Android is generally used by people of all ages, though. When it comes to choosing mobile apps, the gender and age of the users won’t play a big role in that. Their decision really depends on their location and level of income. After all, people who have a higher income are more willing to pay for subscriptions and make in-app purchases. Some app developers depend on these actions for their revenue. Personality The smartphone we use is greatly influenced by our personality, especially our level of extroversion and introversion. Studies have shown that Android users are more introverted than people who use iPhones. Android users also have more humility and honesty in their personality. In addition, Android users like to save money (probably due to how much cheaper Android devices and subscriptions are). Apple iOS users typically like to spend money and like being leaders. Personality shouldn’t be the primary focus of which platform you choose for your mobile app. Every person has a unique personality in some respect, so a study cannot guarantee any kind of results. It is better to focus on the objective of your app and what the intention of the users will be. Technology Adoption A recent Hunch.com poll found that iOS users have a better chance of adopting technology early on. It also found that these users likely went on the internet prior to 1992. These are loyal Apple users who without a doubt have a Mac computer. The same cannot be said for Android users. They tend to adopt technology much later and they don’t seem to care to back up the files and data on their computer. Android users want a lot of features on their device. They don’t care so much about the appearance of it, just as long as it has easy-to-use features like Yahoo Mail. They don’t want to deal with an email domain of their own. Push Notifications Push notifications cause different reactions to come from iOS users and Android users. You will be able to judge the open rates by the device of the users. Statistics show that around 3.5% of users on Android devices will open their push notifications. Less than 1.8% of users on iOS devices will open these notifications. More Android users open push notifications because the messages can be seen on the lock screen. The user needs to take action to get rid of them. But the notifications on the iPhone will go away once you simply unlock the first screen. The feature differences make it faster for users on iOS devices to open their push notifications. The average iOS user spends 7 minutes responding to each push notification while the average Android user spends 48 minutes. These results show that Apple users interact better. Acquisition Liftoff published information about how much it costs to obtain paid mobile subscribers and to get users to engage after they install apps. The information is divided into different segments, according to the primary goal of the app. These segments include registration, subscription, in-app purchase, reservation, and regular purchase. （source Liftoff 2016 Mobile Index） Once an app is installed, iOS users will typically engage more than Android users in all the segments listed above. The only category that shows more Android user engagement is for registrations. （source Liftoff 2016 Mobile Index） In the average month, people on iPhones will spend 9 more hours using their mobile apps than Android users do. iPhone users will usually engage content more often. However, on the Android platform, each category has more media users. Therefore, will your app be successful with more user engagement or a larger audience? You need to decide what your objective is for the mobile app. Are you trying to get users to engage your content or do you just care about getting as many users as possible? 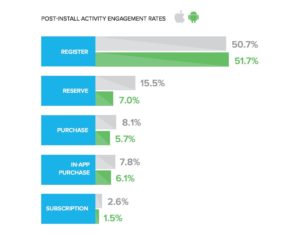 Purchase Power We’ve talked about how iPhone users have more purchasing power than Android users. After all, the median income for the typical iPhone app user is $85,000 annually. This is roughly 40% higher than the median yearly income of an Android user, which is $61,000. Android users may download more apps than iPhone users, but the latter spends double the amount of money on apps as Android users do. During the first quarter of 2017, user spending on iOS apps increased by 45% annually. Android spending increased by 40%. If you are interested in developing a shopping app, then you will want it to be for iOS devices. These users typically spend 4 times more on in-app purchases than Android users. On the other hand, Android users do tend to purchase more utility apps, such as anti-virus programs, performance enhancers, and launchers. In fact, Android user spending on these types of apps is 5 times higher than it is for iOS users. People using iPhones tend to regularly spend more money on in-app purchases and apps. Android app developers make most of their money through mobile ads. Commercial app developers and individuals wanting to monetize must consider this. Platform Loyalty Users of iOS devices are found to be more loyal than users of Android devices. And, of course, iOS users have a higher amount of purchasing power. Like previously stated, Android users enjoy their platform’s openness and the freedom there is to customize. Meanwhile, iOS users prefer their devices to be consistent and easy to understand. They would rather spend time experimenting with new and exciting apps. iPhone owners love their devices and will usually stay loyal to them. About 62% of them are loyal to their smartphones while 48% of Android owners are loyal to theirs. The Choice The Google Play Store and Apple App Store are both very popular and continue to grow. The best mobile app development strategy would be to create an app for each platform. If it is a hybrid app, it can work on both platforms. You just need to develop the app as a hybrid from the beginning. If you create an app for one platform and then wait to create the same app for another platform, it can get more difficult. If you want to choose just one platform, then you need to consider a few things: If your target audience is Android users, then you’ll obviously want to create an Android app. Be sure to allow personalization so that users have a better experience. On the other hand, if you're concerned about user loyalty and spending, then iOS users should be your target. Now you should have a good idea of what your target app audience is looking for, whether it is in the present or future.